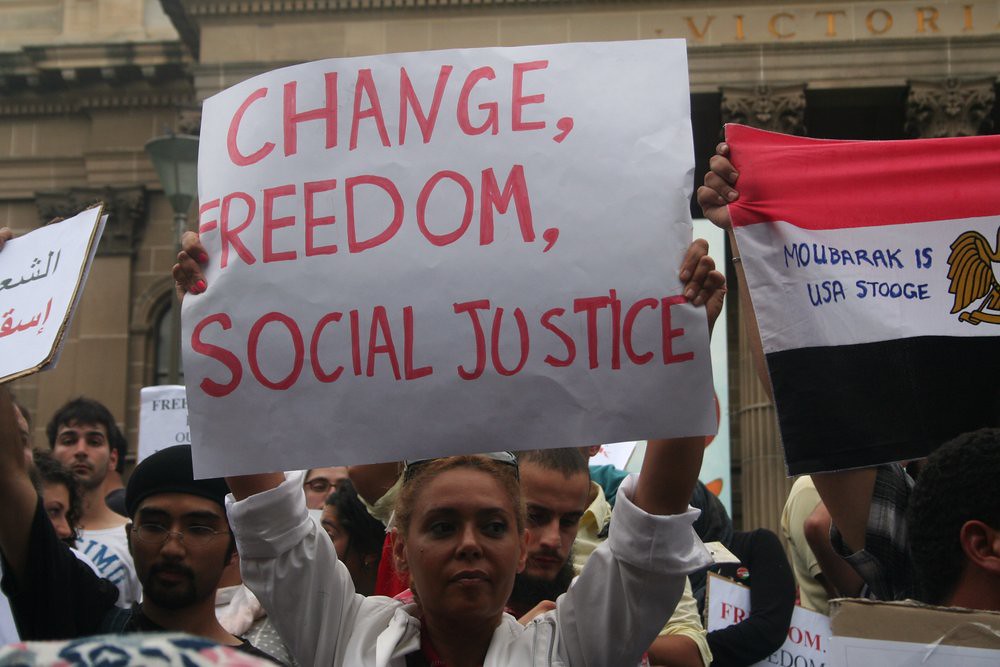 This has been a decisive week for India; historic, even. Publicly, we began a new phase in our response to the coronavirus pandemic. More nefariously, we managed to clampdown dissenting voices with a renewed fervour.

On 14th April 2020, Dalit activist and scholar Anand Teltumbde was arrested alongside journalist Gautam Navlakha for their ‘alleged’ involvement in the Bhima Koregaon case. A thousand kilometres to the north, The Wire’s founder was personally asked to appear in Ayodhya during a lockdown. Mr. Varadaranjan had ‘allegedly’ made an “objectionable comment” about Chief Minister Yogi Adityanath, which demanded immediate attention. A little further, two students of Jamia Millia Islamia university were arrested for ‘allegedly’ plotting the riots which tore through North-east Delhi in February 2020.

Dissent, which was famously believed to be an act of faith in a democracy, was now being construed as an act of treason.  And the glue of social distancing came woefully unfolded, all during a public health emergency.

Meeran Haider was distributing ration to stranded labourers from Bihar earlier this month. The 35-year-old Jamia research scholar and president of the youth wing of the Rashtriya Janata Dal was called into questioning for protest speeches he made during anti-CAA protests in February. On the same day, he was arrested for hatching a conspiracy to provoke riots in Northeast Delhi.

Haider has been charged for attempt to murder, promoting enmity amongst groups based on religion, sedition, amongst other offences. He has been in police custody since April 2nd and has now been moved to judicial custody for two weeks.

Safoora Zargar, another Jamia student, was arrested on April 11th for allegedly leading anti-CAA protests at Jaffrabad metro station. The protest was met with resistance by government supporters and mushroomed into communal riots in Northeast Delhi for three days – killing more than 50 and injuring several others.

Haider and Zargar are now being held without bail for allegedly forcing women and children to protest and making incendiary remarks, amongst other claims, in their opposition to the government’s controversial law.

This closely follows the news of a charge-sheet being filed against Kanhaiya Kumar, Umar Khalid, and Anirban Bhattacharya – who allegedly raised ‘anti-national’ slogans at JNU four years ago. Their colleagues at the Jamia Coordination Committee have also been issued notices to appear for questioning in relation to the Delhi riots.

Questions of why them and why now haven’t gone unnoticed. The memory of the Delhi riots has a notable right-wing MP peddling hate and communal propaganda at its roots. So when authorities arrest protestors under the guise of inciting violence, the blame perniciously shifts in public discourse.

More important is the consideration of why now. The special cell of Delhi Police, which falls under the orders of the Home Minister, chose to investigate claims against CAA protestors during a pandemic crisis.

Curiously, no arrests have been made till date against the perpetrators of JNU violence – who attacked students and professors with sticks and stones, vandalised buildings, and walked out with impunity in the cover of night. Media scrutiny afterwards identified these masked assailants with links to ABVP; Hindu Raksha Dal even took responsibility while threatening more violence. Either self-isolation applies to the likes of Komal Sharma and Akshat Awasthi better than others, or the pursuit to justice is selective in its application.

FIR Against The Wire and its founder Siddharth Varadarajan

In the midst of a nationwide lockdown, UP police officials travelled more than 700 kilometers on April 11th to serve notice to Siddharth Varadarajan, one of The Wire’s founding editors. He was asked to appear at the Ayodhya Police Station on April 14th at 10 am.

The notice was the fruit of two First Information Reports (FIRs) registered in Faizbad. The cases were booked under IPC’s Section 188, which eyes disobedience to order, and 505(2), which prohibit statements creating or promoting enmity, hatred, or ill will between classes.

The legal action was in response to an article published on 31st March, which placed the Tablighi Jamaat event in context to other religious congregations. One of the complaints takes objection to an unspecified tweet by Varadarajan. The second complaint stated:

“The Wire editor on his blog (sic), with the aim to spread rumours and hostility among the public, publicised the following message:

“On the day the Tablighi Jamaat event was held, Yogi Adityanath insisted that a large fair planned for Ayodhya on the occasion of Ram Navami from March 25 to April 2 would proceed as usual while Acharya Paramhans said that ‘Lord Ram would protect devotees from the coronavirus’. One day after Modi announced the “curfew like” national lockdown on March 24, Adityanath violated the official guidelines to take part in a religious ceremony in Ayodhya along with dozens of people”.”

The quote by Paramhans was first attributed to Adityanath, which was later redacted and clarified in a tweet by Vadaranjan.

“I should clarify that it was Acharya Paramhans, Hindutva stalwart and head of the official Ayodhya temple trust, who said Ram would protect devotees from coronavirus, and not Adityanath, though he allowed a public event on 25/3 in defiance of the lockdown and took part himself,” Mr. Varadarajan tweeted.

Varadarajan’s tweet in effect states two things: one, Yogi Adityanath was in support of the religious gathering as late as March 18th and two, he was in fact present at the Ayodhya temple on the first day of lockdown, flouting social distancing rules. Even the quote incorrectly attributed was clarified in the report and on Mr. Varadarajan’s social media, under the regulations of Editors’ Guild.

The “fake news” which The Wire supposedly spread merely put all religious gatherings during or before the lockdown under the scanner. It meant questioning the UP government too. Soon, fact was dismissed for fiction, and vengeance blatantly eclipsed democratic rights.

This would not be the first time the firebrand BJP leader’s government objected to media criticism. Last year, Prashant Kanojia, an independent journalist who previously worked for The Wire, was unlawfully arrested and flown to Lucknow. A similar script played out – Kanojia was charged for a ‘provocative’ tweet thought to malign the chief minister’s image and flown to Lucknow. The top court later ordered his release, citing the right to liberty as a fundamental and non-negotiable right.

Media independence is already at its fragile best – India ranks a 140 on the World Press Freedom Index, slipping four ranks since 2017. Reporters without Borders, the curators of the index, commented, “In India hate speech targeting journalists is shared and amplified on social networks, often by troll armies in Prime Minister Narendra Modi’s pay.”

Various international and national groups have issued a statement in support of the founder of the online media portal. Signatories urged the government to drop all criminal proceedings, claiming them to be tantamount to a “direct attack on media freedom”.

During a national health emergency, the government and media should want the same things. Getting reliable information out to the maximum number of people, looking out for communities on the fringes of society, and placing concerns on a national agenda. But that becomes increasingly hard when the press is penalised for holding the government to account.

Arrests of activists Teltumbde, a scholar, and Navlakha, a journalist

In Hindu mythology, the word “mayavi” refers to a demon; a presence which must face holy destruction. In 2015, Anand Teltumbde, a prolific advocate for Dalit voice in India, was cast off as “Mayavi Ambedkarwadi” by conservative groups. They vandalised his Wikipedia page with the derogatory term for millions to see.

On the 129th birth anniversary of Ambedkar, Anand Teltumbde along with Gautam Navlakha was arrested under the Unlawful Activities (Prevention) Act for allegedly inciting violence in the Bhima Koregaon case. Arundhati Roy regarded this as a ‘tragedy for India’. “To arrest him,” she writes in Scroll.in, “is to try and silence a powerful and unique Dalit voice.”

The Supreme Court refused bail applications and gave the two time till 14th to surrender.  The merits of this case have been widely debated since the Pune police arrested nine activists and lawyers in 2018. The letters seized from the accused were used to illustrate a Maoist conspiracy “to overthrow the government” and assassinate Prime Minister Narendra Modi.

An investigation led by The Caravan uncovered discrepancies in the evidence and charge sheet filed by the Pune police. The authorities dismissed cases against Hindu nationalist leaders for inciting violence but proceeded action against government critics relentlessly. The fabricated evidence was used to indict the accused who have been held in prison for almost two years.

Teltumbde and Navlakha’s arrests have further put the legitimacy of evidence in jeopardy – doesn’t identify the two activists personally and moreover, neither of them were at the event in question. Activists and lawyers have termed this as a “witch-hunt” led by the BJP-led union government to thwart dissent. A primary pillar of their clampdown has been the Unlaw Activities (Prevention) Act.

The despotic nature of the colonial-era sedition law is such that it gives the state power to brand individuals and groups “unlawful” or “terrorism-related” if it believes so. Teltumbde and Navlakha, along with prominent dissenting voices against the political machinery, were arrested under this draconian law – and branded urban Naxals in the court of right-wing public opinion.

The timing of their arrests sounded bells of political manoeuvring. The courts previously acknowledged the threat overcrowded prisons pose during a pandemic crisis. It ordered the release of low-risk prisoners on parole to relieve the pressure. Then it prepared the ground to send two civil rights activists critical of the government to jail.

In a letter to The Wire on the eve of his arrest, Teltumbde wrote, “I earnestly hope that you will speak out before your turn comes.”

These aren’t isolated incidents. In the last four months, several individuals have been charged with sedition and under the UAPA. Scores protested against the citizenship law for months across pockets of the country. A woman stood in a protest with the slogan “Pakistan Zindabad, Hindustan Zindabad” and was later charged for sedition. A parent and teacher were arrested at a private primary school for developing a play “critical” of the new law. Expression of dissent, conscious or unconscious, has met a similar stifling fate.

It bears mentioning that none of these acts was about criminal justice – they were political in nature. And politics is known to send shivers down the branching spine of freedom of expression.

Speaking truth to power invites baleful looks during peacetime. It also invites hate campaigns, arbitrary arrests, and cold-blooded murders. But when power speaks back with all its might to silence critics during a national health emergency – that’s when you know the attack on dissent and democracy is complete, brazen, and unflinching.