This is a story about why toilet rolls became a symbol of panic during the coronavirus pandemic. It has the usual tropes of drama and action, and promises to answer the burning question – why do people hoard?

The initial response to rising coronavirus cases in the UK, and most parts of the world, was to stock up on the essentials. Rolls and hand sanitisers were the first to run out. Dried pasta and canned food followed suit. Empty shelves and long queues snaking through the stores made for some sore sighting for most Brits.

We asked Prof. John Drury, an expert in social psychology at the University of Sussex, why people were stockpiling – and why the infamous loo roll ran out.

The word “panic”, according to Prof. Drury, implies an over-reaction. This change in consumer behaviour wasn’t an excess – it was irrational rationality.

“People believe that they might need to self-isolate, they need to stock up. And the more they are told that others are ‘panic buying’, the more it makes sense for them to also stock up in the same way.”

And Britain seems to have bought a lot – shoppers have spent an extra 1.9 billion pounds on stockpiling groceries. According to a study by Nielsen, grocery sales in the UK were at a record level in March – a rise of 7.8% in the last 12 weeks, the highest in the whole decade.

In particular, shoppers in London increased their spending by 26% in March, the highest in comparison to other parts.

Britain’s early response to the novel coronavirus gave way to two things: criticism and uncertainty. The latter further manufactured anxiety and fear – which spiraled into a need for control over something.

In the end, Britons made almost 80m extra trips to the grocery stores in less than four weeks.

Environment Secretary George Eustace told his MPs that there will be no shortage of food and supplies – there was a “significant resilience in our food supply chain”.

No.10 also bellowed for calm and discouraged people from hoarding. But like the whole issue, it came down to trust.

“The politicians might say that people don’t need to stock up on toilet paper, but politicians are not trusted, and peers are saying something completely different.”

And thus, the market supply chain which worked “just in time” began to see gaps – lower stock – as a result. People believed that they might need to self-isolate, so everyone began to stock up.

Toilet rolls served the purpose of tissues in addition to their conventional role. Pasta and canned food became edible faces of endurance as they could be stocked for longer periods of time.

The trouble, according to Prof. Drury, is not the rationality of hoarding but that of individual-level psychology.

“When everyone behaves simply as an individual, in terms of their personal identity rather than their social in a collective situation, this is where we get problems in times of a threat.”

Think blocked doors. You lock 100 people in a room and keep them there for hours. As soon as the first door opens, all of them will rush towards it which could lead to trampling. But we would still do it – because of the chasm between our personal and social identity.

The new normal of grocery stores

For all intents and purposes, hoarding triggered a moral and logistical crisis. Grocery stores were ransacked of all essentials. The hunt for hand sanitisers and pasta had people traipsing all over the city.

By the middle of March, most grocery stores had imposed restrictions on the number of products one person could buy. Sainsbury’s, Asda, and Tesco allowed three items per person. 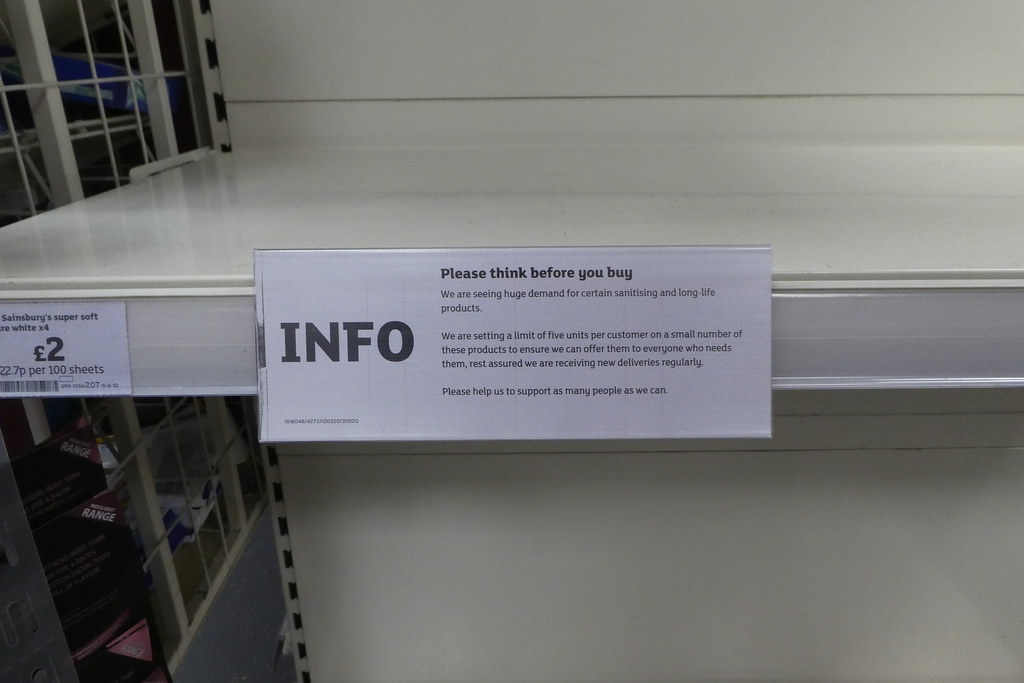 “Please think before you buy” by duncan is licensed under CC BY-NC 2.0

It’s been 70 years since the lockdown. Oh, seven days, really? As people quarantined, pressure points on grocery stores eased. Waitrose, Morrisons, and Aldi have relaxed their restrictions. Lidl went ahead to lift purchase caps on every product, except for toilet rolls. 20p loo rolls are the true test of humanity.

Social etiquette has been refashioned to make better humans out of all of us during this pandemic. The new commandments are – thou must maintain two feet of distance at all times, thou must buy only what you need (and not want), and thou must be considerate of other people at all times.