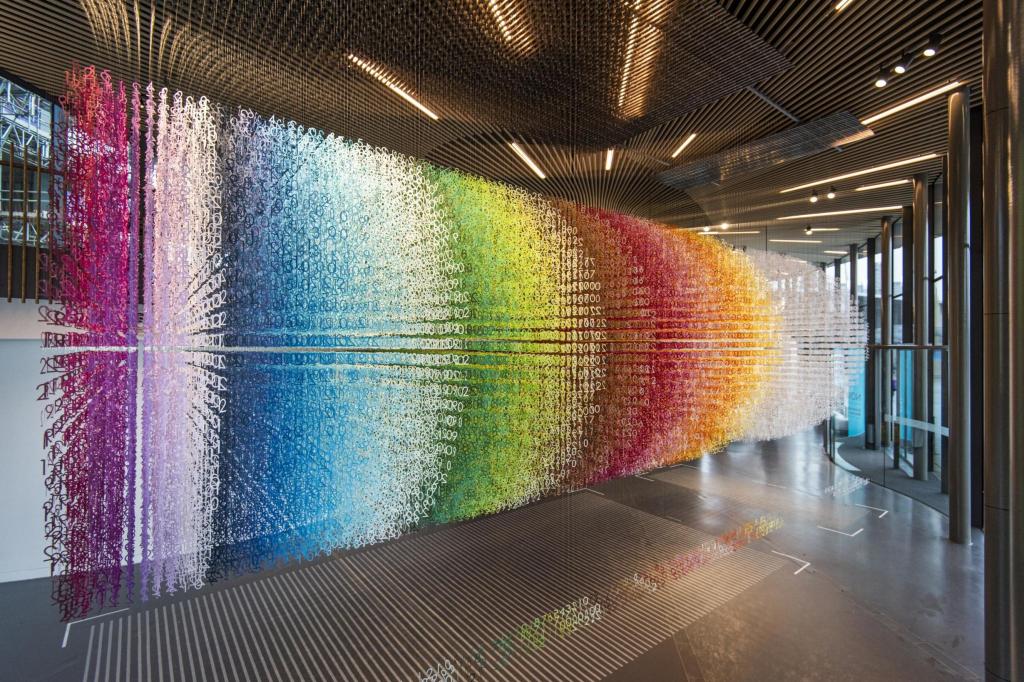 NOW Gallery in the Greenwich Peninsula plays host to French designer Emmanuella Moureaux’s first major installation in the UK, Slice of Time. The chromatic exhibition refigures space and time, and puts you at the center of it.

A dreary February afternoon has the potential to lack vigour, but not in Emmanuella Moureaux’s world. The French architect brings her latest installation to the Greenwich Peninsula, and it is quite the colourful affair.

From the moment you enter Slices of Time, tiny explosions of colour fill the corner of your eyes. At the heart of these explosions are numbers, bristling on top of each other in layers.

Moureaux uses 168,000 numbers to signify time, as they dangle from the ceiling using threads. These levitating figures are dappled in a 100 shades of colour, including the unfussy white, to carve a world of measured vibrance.

And when I say world, I mean it quite literally. What surrounds you is a psychedelic reimagining of the past, present, and future – floating around in tiny, delicate circles, in the shape of a globe.

Slices of Time doesn’t shy away from reeling you right to the center, right at the beginning. Visitors are given round bits of paper to etch memorable dates and the reason they are important to them. In the madness of living, Moureaux’s world wanted you to stop and wonder.

These dates are placed on the gallery’s wall in succession, piecing together a timeline pulsating with life. An experiment with immersive installation, Moureaux’s aim is to capture fleeting moments in the whirlwind of existence. And capture she does. The aesthetic which now included me, and thousands of others, brings in a moment of colourful contemplation.

A predominant theme in Moureaux’s work is of ‘shikiri’, a concept which constructs the division of space with colour. We get to see shikiri in practice at Slices of Time; it projects colour as a three-dimensional element marking space. [a1]

While Moureaux portrays the possibilities of colour to be endless, she doesn’t compromise on consistency, on creating a motif. One hundred shades always come alive in her work, albeit each installation modifies its assembly and form.

More than her Parisian roots, it is the 25 years of soaking in Tokyo’s cityscape which have shaped Moureaux’s vivid imagination. She has admitted to being inspired by Tokyo’s layers and colours, and finding the intersection between art and shapes there.

From Paris to Tokyo, the kaleidoscopic installation has toured all over the globe. When in the United Kingdom, it seems only fitting that her musings of space and time position themselves near the Meridian Line.

Renown for engaging their audience, NOW Gallery has previously housed exhibitions of contemporary design and fashion. These include Camille Walala’s multi-coloured maze and Fred Butler’s harmonics in space installations.

The latest is Moureaux’s riot of colours, which ushers in a moment of grace and reflection. As you walk away, you’re compelled to think about how the spectacle echoes with order, calm, and life, all at once.

To call Slices of Time an installation would be an injustice. An exhibition doesn’t do the trick too. It is a vibrant experience which knows how to leave a mark.

Slice of Time is now on exhibit at the NOW Gallery in Greenwich Peninsula, South East London from February 5th to April 19th. It’s free to enter but the organisers recommend booking slots due to the overwhelming popularity. For more details, click here.